The searing tale of a physically and mentally damaged girl who yearns to become the world’s first female cutting horse champion. The Gershwin Cutter depicts the documented abuse and life of an intrepid, young woman Rebecca, and her devotion to a one-eyed horse, Ira. The singular journey of Rebecca and Ira advances through the traditional, southern sport of cutting horses, with help from an unexpected source—the American composer George Gershwin whose preludes form the primary

A preemie that suffered bullying in her youth, Simone Hudson, due to her tenacity, earns the right to be a detective in Austin’s Police Department in Texas. The precocious policewoman begins her career on the case of a missing student. Through a series of seemingly unrelated events, Simone is lead to a kidnapper whose illustrious record is as inconspicuous as his style, and in doing so she confronts an unfulfilled debt, Karza, owed a mysterious 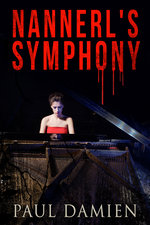 THE HAMMER STRIKES! Drinking herself into a stupor to avoid the horrible nightmares is the only way Julie Conway can face life…until she hears about the Hammer. NANNERL’S SYMPHONY is an unusually chilling and thought- provoking psychological thriller that takes the reader into the tormented soul of an Atlanta district attorney in her quest to solve a series of gruesome murders. The brutal manner in which the gifted, young boys are executed earns the killer

In 2009, a group of wealthy individuals, headed by Bill Gates, secretly formed the Good Club to curb the expanding world population problem. Years later, the influential members of the fictional Better Club decide to adapt this aim by unleashing selective genocide. What they don’t count on is British Agent Helen Ramsey. When a fourteen-year-old Pakistani girl, Raameen, turns up dead in London, Helen is drawn into the case. A single murder soon turns into

Hunt for a serial killer linked to Mozart!